You are Not One of Us

I really don’t want this to be a political blog. Honestly. Yet the politicians—who you would think should know better—keep making themselves look stupid.

Here is a picture of an actual political sign I found along the side of the road. If the candidate did not come up with it on his own, he must have at least approved it. 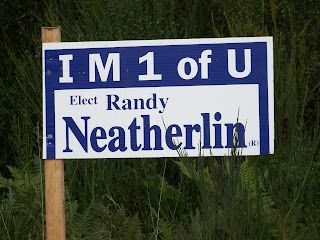 You, Randy Neatherlin, are not one of us.

The sign might seem like a new, original, and even clever idea at first glance, but when you think about it, this is a really boneheaded move.

Does this guy really think he’ll get more votes by looking like a high school flunky?

Please don’t get me wrong. There is a place for the short-cut writing used on this political poster. The place for it is text-messaging on the phone when you are in a hurry.

Is it really that hard to include an extra five letters?

I taught school for three years. I was constantly fighting (figuratively) students to write well and write correctly. I taught them that things like grammar, syntax, punctuation, and spelling actually matter. Then idiots like this guy toss in a stunt like this and these young people see it and actually believe that is, if not the way is supposed to be, then at least not wrong.

I also find the capitalization strange. This sign is capitalized as if it were a title—doubtless they thought it would be easier to read that way. It strikes me as false. Someone who was writing a quick text message would not go to the trouble of capitalizing some letters and not others.

No sir, you are not one of us. I find this to be an incredibly huge lack of good judgment. A guy who thinks this poster is a clever idea is not worth voting for. If I decide his opponent is not worth voting for either, I simply won’t vote for that office. (Let’s face it, in Washington State if you don’t live in Seattle or King County, your vote never really matters anyway—not that that stops me from voting.)
Posted by Utok at 6:26 PM 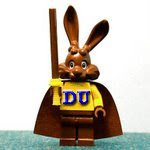